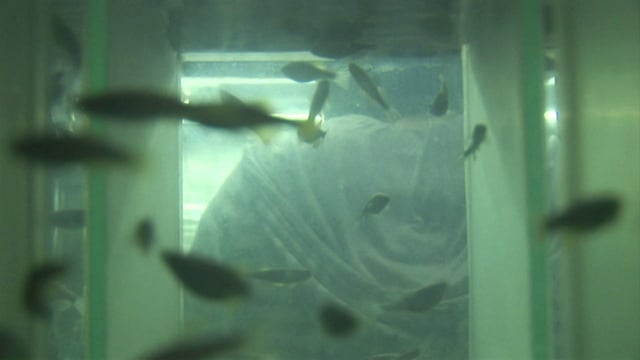 Deborah was awarded ACE funding and the support of ICIA at University of Bath where she was artist in residence between September 2009 – April 2010 at the University’s Department of Biology and Biochemistry, one of the UK’s premier bioscience centres. This houses a fish facility with 500 tanks and 10,000 fish. Here transparent medaka and zebrafish are used as biomedical models for research into human development and disease.

This project was given support from the Max Planck Institute for the History of Science, Berlin, where Robinson was a guest in August 2009..

SUMMARY OF IDEAS BEHIND THE ARTWORK: In this project the observer / observed relationship central to scientific experimentation is reversed by filming and recording from inside the fish tanks. The aim is to destabilize the relationship between scientific researcher as ‘self’ or ‘I’, and the living organism under observation through construction of an imagined ‘ fish – I – eye’ view. Deborah used art practice to explore the dynamics of power and control that prescribes who is the observer and who is observed in the laboratory. ‘The laboratory’ is conceptualised as a sealed capsule, set apart from the real world, where discipline is imposed on the subjects studied. In these circumstances it is necessary for the scientist to cut out his/her own presence from the experiment. By filming from inside the tanks the work will – if intermittently – reintroduce the presence of the scientist/human as they carry out research tasks. These appearances have an element of chance contrasting with the ‘controlled’ culture of the lab and the information produced.

SOUNDWORK IN COLLABORATION WITH DAVID STRANG: Sound has been produced during the project in collaboration with David Strang (UoP). This involves the transposition of data from Robert Kelsh’s research on pigmentation into sound. This data derived sound has then been used as a filter for sounds recorded using a hydrophone within the fish tanks.